Conjuring the specter of Emmett Till's murder, a nightmarish reverie on white violence and silence in America

Emmett “Bobo” Till, a 14-year old Chicago youth, walked into a store in Money, Mississippi to purchase 5-cents worth of bubble gum from Carolyn Bryant, a 21-year old, white mother of two. Within a few days of this interaction, Till’s beaten and bloated body was found tied to a cotton-gin fan in a shallow part of the Tallahatchie River. Bryant’s husband Roy and his brother JW Milan would be acquitted of Till’s murder by an all-white male jury, only to confess to the murder a year later in a Look Magazine article. Carolyn Bryant maintained a public silence about that day for six decades, until 2017.

What happened in those fateful minutes shared between Bryant and Till in the store? Creators Nataki Garrett (Artistic Director at Oregon Shakespeare Festival) and Andrea LeBlanc (Associate Dean of the CalArts School of Theater) layer historical transcripts, video imagery, and re-imagined encounters to expose what lies beneath the exchange between Carolyn Bryant and Emmett Till in Mississippi in 1955. Piecing together fragments of a distant era, Garrett and LeBlanc’s excavation traces terrifying parallels to America today.

This production was originally directed for the stage by Nataki Garrett.

Nataki Garrett is Oregon Shakespeare Festival’s sixth artistic director. As the former associate artistic director of CalArts Center for New Performance, Garrett has been hailed as a champion of new work as well as an experienced, savvy arts administrator. 2019 was Garrett’s first season at OSF, where she directed How to Catch Creation. At CalArts, Garrett oversaw all operations of conservatory training and produced mainstage, black box, developmental projects, plays, co-productions and touring productions. She is currently on the nominating committee for The Kilroys, and she recently served on the Harold and Mimi Steinberg Charitable Trust Distinguished Playwright Award nominating committee and the Fox Foundation Resident Actor Fellowship panel. Garrett most recently served as acting artistic director for Denver Center for the Performing Arts (DCPA) during the $66 million organization’s 18-month leadership transition. During her tenure, she produced a very provocative Macbeth; the play was the most successful production in the Space Theatre’s 40-year history. Garrett is a recipient of the National Endowment for the Arts and Theatre Communications Group Career Development Fellowship for Theatre Directors and a member of the Stage Directors and Choreographers Society. Garrett is also a member of the board of directors for Theatre Communications Group, a company member at Woolly Mammoth, and an advisory board member for Mixed Blood Theatre.

Andrea LeBlanc is the Associate Dean and Co-Head of BFA Acting at CalArts School of Theater. She is an actor, teacher, and writer who is committed to all aspects of performance and thrives in pioneering new performance and theatre aesthetics. Her experience spans feature films, independent films, traditionally-based theater, experimentally-based theater, webisodes, voice-over, and radio. She is an alumna of the CalArts School of Theater.

The Carolyn Bryant Project was developed by Blank The Dog Productions and CalArts Center for New Performance and is made possible in part through funding by the MAP Fund and Trans-Atlantic Consortium. 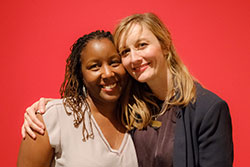 Learn More
Readings/materials from the artists